Don Casner Gourmet Yuca is ready in 4 minutes and absorves much less fat due to its innovative manufacturing process! In natura this product does not contain gluten, is trans fat-free, saturated fat-free and allergens-free and it is 100% natural! 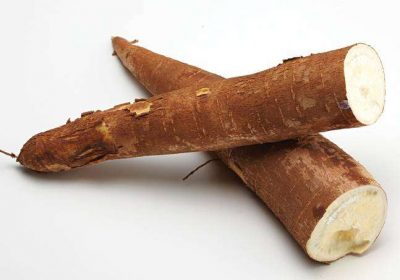 Elected by the United Nations organization, the UN, as the 21st century’s food, it has been reverenced for a long time here and got the title of “Queen of Brazil”. Its majesty, the yuca, already prevailed long before the Portuguese colonizers disembarked in Tupiniquim lands.

It was the disposition secret of the antient native people and became the energy source for lots of Europeans that, on this side of the Atlantic, exchanged wheat bread by beiju. In fact, over 500 years passed, today we observe a very similar movement: the French bread is losing it’s throne to tapioca.

Diversifying the menu is always a good request, even more so when the replacing ingredient is rich in precious substances. In the case of that root which, per the region, is known as yuca or macaxeira, we should pay attention to two kinds of carbohydrates, the amylopectin and the amylose.

The duo causes glucose to be released more slowly into the body. And that noble process avoids blood’s sugar spikes, which spares the pancreas of exhaustive work, reducing the risk of type II diabetes. Still thanks to the majestic starch and fiber duo the feeling of satiety lasts longer, which attenuates binge eating. As if that was not enough, the mechanism ensures long periods of breath, being the reason for having energy to spare.

Versatile, yuca is the queen of Brazilian cuisine, amongst its derivatives, the flour reigns in countryside cuisine and accompanies foods from beans to dried meat, going through stewed dishes, amongst other delicacies. The tacacá, broth that only filled the gourds in the Northern Region, is now appreciated also in restaurants more to the south of the country.

Currently, however, the biggest success derivate from the root is, with no doubt, the tapioca. And there the creativity of the cuca-master counts points, for better or for worse. In the original recipes, the fish, the grated coconut and the queijo coalho are the filling options, but it is now possible to find versions with condensed milk, brigadeiro and the such.

The northern delicacy makers must find such foolishness strange. To make things worse, the inventions usually add loads of calories and put the silhouette at risk.

For the ones who enjoy the natural flavor of the vegetable, it is suggested to cook it with an oil thread to retain the nutrients. Besides the carbs, the yuca provides us with fibers, offers vitamin C and minerals like potassium, magnesium and calcium.

And, by means of research and cross breading, its white pulp has been tarnished with shades of yellow from the carotenoids, pigments famous for the potent antioxidant action and protection against aging diseases.

When buying, check if the root has a uniform color – white or yellow, depending on the quality, but never gray, refuse the ones that present spots or dark grooves, and a secret to make them soft is to keep them under the cooking water until served.

Sago: made from yuca’s starch, these little balls become deliciously gelatinous when moistened. They usually appear in the preparation of a sweet dish with wine, clove and sugar.

Yuca powder: it results from the decantation of yuca and goes through a stage of fermentation. The sour kind is used in cheese bread and sequilhos. The sweet kind, on the other hand, is an ingredient for chipa, a biscuit of the Paraguayan cuisine. Prioritize the fresh powder, less industrialized, that have a more striking flavor.

Flour: the most popular derivative comes up after the yuca is pealed, left under water and wringed. The flour is used in the recipes of pasta and cakes and is base of the traditional farofa, that goes well with bean stew and jabá, amongst other dishes.

Tapioca: the gum used for the recipe is the product left at the bottom of the pan during the extraction of the flour. When preparing, prioritize the fresh ingredient to better feel its good taste. 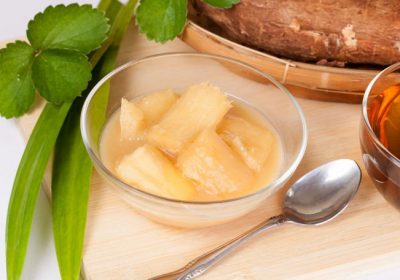 The yuca is a starch rhizome that is mainly cultivated in the warm climate of Africa, Asia and South America. Yuca must not be consumed raw. This because it contains toxic amounts of cyanogenic glycosides, that can be reduced to innocuous levels by cooking. Besides the cane, the yuca is one of the riches sources of carbohydrates. The Yuca is an excellent source of carbs, Vitamin B9 (folic acid), Vitamin C, Magnesium, Manganese, Copper.

How to pick yuca: Search for firm roots with no signs of odors and no signs of different colors.

Frying-immersion preparation is optional for greater crispness. In a medium frying pan heat the oil (enough to cover the Yuca Gourmet Don Casner) on average for 5 minutes. Put half the package, if you prefer, a cover may be used as the oil may sneeze. Fry for about 4 minutes. Remove with a slotted spoon and leave on absorbent paper for a few minutes.

As Don Casner Gourmet Yuca is already cooked, remove from the freezer, defrost naturally or in the microwave or in boiling water and is ready to consume, if you prefer it can be added in the preparation of your favorite dish. 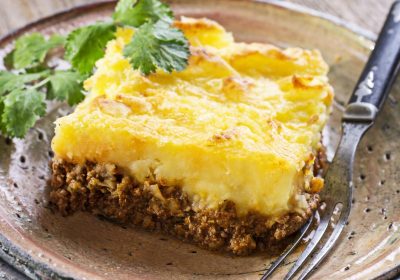 In 2016 comes Don Casner Goumet Foods, a 100% national industry, whose main goal is to bring healthy food to the table of the most demanding consumers. From planting to industrialization, our products are produced following the strictest international quality standards. The quality of the products of the field at the table of consumers has always been the goal of Don Casner Gourmet Foods, guaranteeing products with high nutritional value and excellence in its quality.

I loved the Yuca, Fried was a delight, did not get drenched with fat, my family approved, now here at home we only bought the Yuca Goumet Don Casner.

In the past, I used to buy yuca in natura, I had to wash and peel, to cook for about 30 minutes, not knowing if it would really be soft. Today, with Yuca Don Casner, it is no longer possible to defrost and ready, not to mention the loss that was approximately 30 to 40% of the product and now with Yuca Gourmet Don Casner the use and 100% of the product I bought .

I loved Don Casner’s Yuca Gourmet, super easy to handle, you can not go wrong making my yuca recipes.